The decision to be aware of here is Manhattan Pizza Hut, Inc. v. New York State Human Rights Appeal Board, 51 N.Y. 2d 506 (1980), which went like this: Notwithstanding an employer’s anti-nepotism rule, an employee had worked under the supervision of her husband for approximately four years. When a new manager took over, he terminated the wife’s employment pursuant to the anti-nepotism rule. The New York State Court of Appeals concluded that the employer’s action was not marital status discrimination. How is this possible? Because, reasoned the Court, marital status is a question of whether the employee is married, single, widowed, separated, or divorced. Marital status has nothing to do with whom the employee is married to. The employee in Manhattan Pizza Hut was not fired because she was married, but because she was married to her supervisor.

The Manhattan Pizza Hut logic has carried into situations where a company refused to hire an applicant because her husband was already employed there (Matter of Campbell Plastics v. New York State Human Rights Appeal Board, 81 A.D. 2d 1991 (3rd Dept. 1981)) and to a denial of health insurance to an employee who has comparable coverage under a spouse’s insurance benefit (Police Ass’n v. NYS PERB, 126 A.D. 2d 824 (3rd Dept. 1987)). A corrections officer who married an inmate was discharged, not because of her status as “married,” but because she broke a rule against having a relationship with an inmate. Vega v. Dept. of Correctional Services, 186 A.D. 2d 340 (3rd Dept. 1992). In Cramer v. Newburgh Molded Products, 228 A.D. 2d 541 (2d Dept. 1996) an allegation that a plaintiff was terminated “because she was married to Joseph Cramer” did not survive a motion to dismiss because the termination was based on her being married “to Joseph Cramer” rather than simply on her being married. In McGrath v. Nassau Health Care Corp. , 217 F. Supp. 2d 319 (EDNY 2002), an employee who was sexually harassed did not additionally have a marital status discrimination claim even though her harasser made comments to the effect that she would be “stupid” to marry her fiancé, refused to give her time off to plan her wedding, told her she should not be sleeping with her husband, and tried to dissuade her from going through with the marriage during the wedding.

In Kipper v. Doron Precision Systems, 194 A.D. 2d 855 (3rd Dept. 1993), an employee’s marital discrimination suit survived dismissal[1] because there was evidence his supervisor told him he was chosen for layoff because he would not experience financial hardships as severe as his married co-workers. The Kipper plaintiff was not laid off because of his involvement or non-involvement with anyone in particular, but because the employer considered him less vulnerable to financial hardship because he was single.[2]

Contrary to State Law, New York City’s marital status discrimination prohibition is given a “broader meaning than simply married or not married.” Morse v. Fidessa Corp., 165 A.D. 3d 61 (1st Dept. 2018). In direct contrast to the State Court of Appeals’ analysis of State Human Rights Law, the First Department has concluded that the “plain meaning” of marital status includes who the person is married to. In Fidessa, the First Department rejected the Manhattan Pizza Hut definition of “marital status” and specifically found that, under New York City Code, it also encompasses who is married (or not married) to whom.

Likewise, very recently, where a University rescinded its invitation to be part of a new institute following a professor’s divorce from another professor, the NYC marital discrimination suit survived summary judgment.[3] Karayiorgou v. Trustees of Columbia University, 2021 N.Y.  Slip. Op. 31044(U) (NY Co. January 14, 2021). Although factual issues of Karayiorgou remain to be determined, the Court noted strong evidence that the professor had been invited on the strength of her significant contributions to the scientific community, and that un-inviting her based on her ending her relationship with another professor not only constituted marital discrimination, but also smacked of gender bias in that the University’s arguments tried to downplay the plaintiff’s credentials and accomplishments.

Unfortunately, for the vast majority of employees,[4] federal discrimination law does not specifically prohibit discrimination on the basis of marital status. A survey of the 50 states’ laws on marital discrimination is beyond the scope of this article, so as always we strongly encourage you to consult with a qualified employment attorney in your jurisdiction.

Short answer: Employees in New York City have relatively strong protections against marital status discrimination. Employees in New York State have protections that have been significantly limited by decisional law. Protections in other states depend on state and local laws and regulations. Bottom line, if you believe you have been discriminated against due to your marital status, the first thing you should do is contact an employment lawyer in your jurisdiction to see what kind of protections you might have, and what if anything can be done to protect your rights.

[1] Surviving a motion to dismiss just means that the case isn’t thrown out of court. It doesn’t mean he won.

[2] Notice anything about the breakdown between plaintiffs’ genders in Item #1 versus Item #2? Don’t try to hang your legal hat on it, but it may say something about what these decisions are trying to accomplish.

[3] Like a motion to dismiss, surviving summary judgment just means that the case isn’t thrown out of court. It doesn’t mean she won.

[4] Employees in the Federal Civil Service do have some protections under the Civil Service Reform Act of 1978, which includes marital status as a protected status. 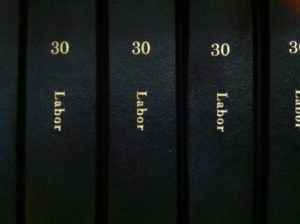 A webinar for workers.

Do you work in New York?  Do you have a question about your workplace rights?  This is your chance to ask an attorney about it.  One lawyer, six participants, eight minutes per participant (we’ll have a timer!)  Quick answers to your questions about wage and hour violations, discrimination, harassment, whistleblowing, unionizing, non-compete clauses, and other questions like “can they really do that to me?”

Participants will receive a 10% discount on a one-hour consultation with the Satter Ruhlen Law Firm.

Please note that this webinar is for informational purposes and is not to be considered legal advice. Participation in the webinar does not create or imply an attorney-client relationship. If you would like a dedicated one-hour consultation with us, please contact the Satter Ruhlen Law Firm at 315-471-0405 or through our website (https://www.satterlaw.com/contact-us/). We look forward to walking you through your workplace rights.

*Registrations will be screened for employees’ protection.

Please note that the information contained in this post is for informational purposes and is not to be considered legal advice. This blog post does not create or imply an attorney-client relationship.  If you would like to discuss your particular circumstances with us, please set up a consultation by contacting the Satter Ruhlen Law Firm at 315-471-0405 or through our website (https://www.satterlaw.com/contact-us/).  We look forward to walking you through your workplace rights.

This post isn’t about how to not get arrested at a protest.[1]  If you are engaging in civil disobedience against state-sanctioned murder of people of color today, in all likelihood you have already weighed the pros and cons of making your voice heard versus being arrested for blocking traffic or disturbing the peace.  These are the choices every person has to make for themselves.

First, unless your employer is a Government agency, remember that you do not have first amendment rights in the workplace.[2]  In most cases, your employer can fire you for any reason or no reason at all.

That said, pay attention to what the Employer says and does.  Is everyone who got arrested getting fired? Or just a subset, for instance, people of color or people from a particular nation?  Are some people getting lesser penalties, such as suspensions?  How about people who got arrested for counter-protesting?

If penalties for similar conduct split along racial lines, then start writing.  Take copious notes.  Note what the employer says to you and what the employer’s security guards say while they’re escorting you out.  Write it all down.  It might or might not be evidence of discriminatory intent (let the lawyer sort that out). When you get home, write up your observations in an email and send them to yourself.

If you’re protesting today, your day job should be the last thing on your mind. Your primary concerns should be making your voice heard and staying safe.  But if work gets crazy on Monday morning, the above steps may help you protect your workplace rights.

[1] If you’re out there today protesting, please make sure you know how to identify protest monitors and legal observers, and have a safety plan.

[2] If your employer is a Government agency, you have limited First Amendment rights in the workplace, and only in very limited  circumstances will they protect you from being fired.

[3] Note the words “supposed to.”  The reality of this prohibition is extremely messy and difficult to prove.